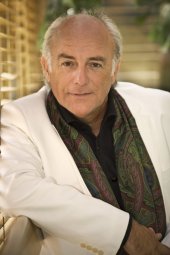 A Tender Brute with an impressive career

Herbert Flack was born of a British father and a Flemish mother in June 1949 near Antwerp, four years after the liberation of Belgium.
He studied at the theatre faculty of the Koninklijk Vlaams Muziekconservatorium (Royal Flemish Conservatory – Drama Department) of Antwerp, graduating in 1971 with distinction.
In 1987 he participated in a workshop of Delia Salvi (Actors Studio L.A.) in Amsterdam.
Never loosing his natural born grace, he evolved throughout his career from a juvenile lead into an artistically matured handsome man. Fascinated by language, he has long proved to be an expert in the dance of words and rhythms that can mirror reality, bring it to life, or defy it. This art had him waltz with verve from the stage to film sets and back.

A Seducer on Stage

For twenty-five years, Flack was a member of the company of the Koninklijke Nederlandse Schouwburg (Royal Dutch Theatre) in Antwerp, where he featured as a star in many classic and contemporary productions. He was Treves in The Elephant Man (Pommerance), Boris in Children of the Sun (Gorki), Nico in Norman, is that you? (Clark), Henry VIII in Thomas More (Bolt), Ripafratta in Mirandolina (Goldoni), James Carmichael in Romantic Comedy (Slade), Kittel in Ghetto (Sobol), Gennadi in The Forest (Ostrovski), Versjinin in Three Sisters (Tsjechov), and Sultan Saladin in Nathan the Wise (Lessing).

Often he had the pleasure to be granted the role of the irresistible seducer, from Don Juan to Don Quixote.
He was Leonardo the lover in Blood Wedding (Lorca), and he tamed shrews in the role of Petruchio (Shakespeare). As a juvenile lead he took in girls from most honourable families, such as Fientje Beulemans. In Woyzeck (Büchner) he was Drum Major, and in Educated Women (Molière) he was Trissotin. As Dracula (Tiller) he sucked and licked blood.

The theatre microbe will not vanish though and a little further you can read all about his theatre career on an independent basis.

Starring on the Silver Screen

But theatre is not Flack's only passion, as shown by his appearance in over thirty films. He made his entry as the young lover in Vrijdag (Friday) (Hugo Claus), was a policeman in Zaman (Lebon), made an Odyssee d'Amour with Pim de la Parra in the Dutch Antilles, and was cast as a playboy in Springen (Jumping) (De Decker). On a more humouristic note he was the rival of the famous Flemish comic Urbanus in Hector and Koko Flanel (Stijn Coninx), and the deceived husband in the Dutch blockbuster De familie Flodder (The Flodder Family) (Dick Maas). His most recent appearance on screen was in Film 1 (Piranha Blues), the excellent and provoking debut of Willem Walleyn.

Herbert Flack has appeared in Flemish, French as well as Dutch prime time TV serials such as Medisch Centrum West , Wittekerke , Plantage Allee and Les Steenforts. In 1998 he was the lapsed hero of the famous serial Diamant (after Jef Geeraerts). With his graying whiskers being just another attribute of a never failing charmer he now has admirers in almost every household watching Thuis, a soapseries on national television TV1.
Up to 2003 when he found another challenge in becoming chief inspector Pieter Van In in the thriller series "Aspe" from the most read Flemish author Pieter Aspe.
The first series was broadcasted in 2004 and generated over 2 million viewers.
« Aspe » knew no less than 10 years with 127 episodes, in which not only many crimes were solved in Bruges and its surroundings but in which the love lives of the main characters equally got told. The public loved the series enormously and embraced Herbert Flack as Pieter Van in, together with Francesca Vanthielen as Hannelore and Lucas Van den Eynde as Versavel, as well as the other regular cast members.
You can all read this under the item "ASPE".

What many people don't realise is that Flack's alluring voice is the very voice which can be heard in many commercials on radio and television. He is not completely void of business instinct.
Combining a cool head with a warm heart Herbert Flack is a rather exceptional personality in the world of actors. His is a nonchalant chic, a daring blend of good looks and provocation – something that might very well be due to his English roots. He is a man of the world, who catches the appreciative eyes of women.
But above all he is an actor who loves acting, equally at home in the classic world of repertory theatre and the world of film and television, dominated by concerns of high ratings.
He knows the art of self-expression in its many forms, and takes it even further, turning it into the art of seduction. After all, what is acting if not seducing?

Theatre after KNS :
In spite of his successful television work, the theatre microbe still got to him. He therefore returned to the stage with a monologue "WOMEN ! The itinerary of a seducer …". This outstanding solo charmed over 45.000 people throughout Flanders.

He then took on the comedy "What Night is For" by Michael Weller. His co-star was An Nelissen en Peter Perceval directed this play on relationships. They played over a 100 performances. They amused and moved the audience effortlessly.

During the Mozart Year 2006 Herbert Flack was brilliantly casted as Antonio Salieri in the wonderful play by Peter Shäffer "Amadeus". More than 40.000 people enjoyed his outstanding performance which was much acclaimed upon. Herbert was outstanding and the newspaper De Standaard entitled his performance as "the role of his life".

After this successful production Herbert Flack and director Bruno Van Heystraeten again joined forces in 2009 for a classic play from the international repertory : "Cyrano de Bergerac", the legendary love story.
The magnificent costumes, the grand emotions and the top cast were the ingredients for a spectacular evening on the proud soldier-poet with the huge nose.
The role fitted Herbert like a glove and he played with overpowering flair and grandeur.

The next production was born in 2012 : "The Lady with the Dog". The theatre adaptation by Claude Merle honoured the novel of master writer Anton Tsjechov brilliantly and became a precious pearl.
Herbert was flanked in this own production by the talented actress Katrien De Becker, known by the public as June in the VTM soap series “Familie”.

Although the television series of “Aspe” ended in 2014, Herbert met Pieter Van In again, but this time in another way, as in 2015 Frank Van Laecke directed a play “Aspe. Murder in the Theatre”. The audience was requested to help unravelling the plot and find the killer. It made the performance not only quite special but it became an instant hit.
Two years later this successful formula was repeated in the play « Aspe 2. The Deadly Jubilee”.
The public came again in large numbers and joined enthusiastically to solve the crime.

In December 2017 Flack explored another theatre style : the WINTERREVUE – THE SOUND OF MOVIES. Three years ago Theater Elckerlyc in Antwerp reinstated this traditional show during the winter holidays to entertain the public with a great showpiece. Herbert dashed with great gusto into sketches, singing and dancing as host of the evening, surrounded by a great cast and crew. The audience was thrilled and the spectacle was a huge success.

A completely different challenge was his participation in "Sterren op de Dansvloer" (on BBC as Strictly come Dancing) in January 2007. His professional dance partner was Ellen Ekkart, who taught him the full range of ballroom and latin dances. Herbert swung, stepped, turned, counted, moved, lifted, danced and it was a real pleasure to watch him. Unfortunately after 4 dances (cha cha cha, quickstep, jive and slowfox) he didn't get enough votes and the dance adventure sadly came to an end.